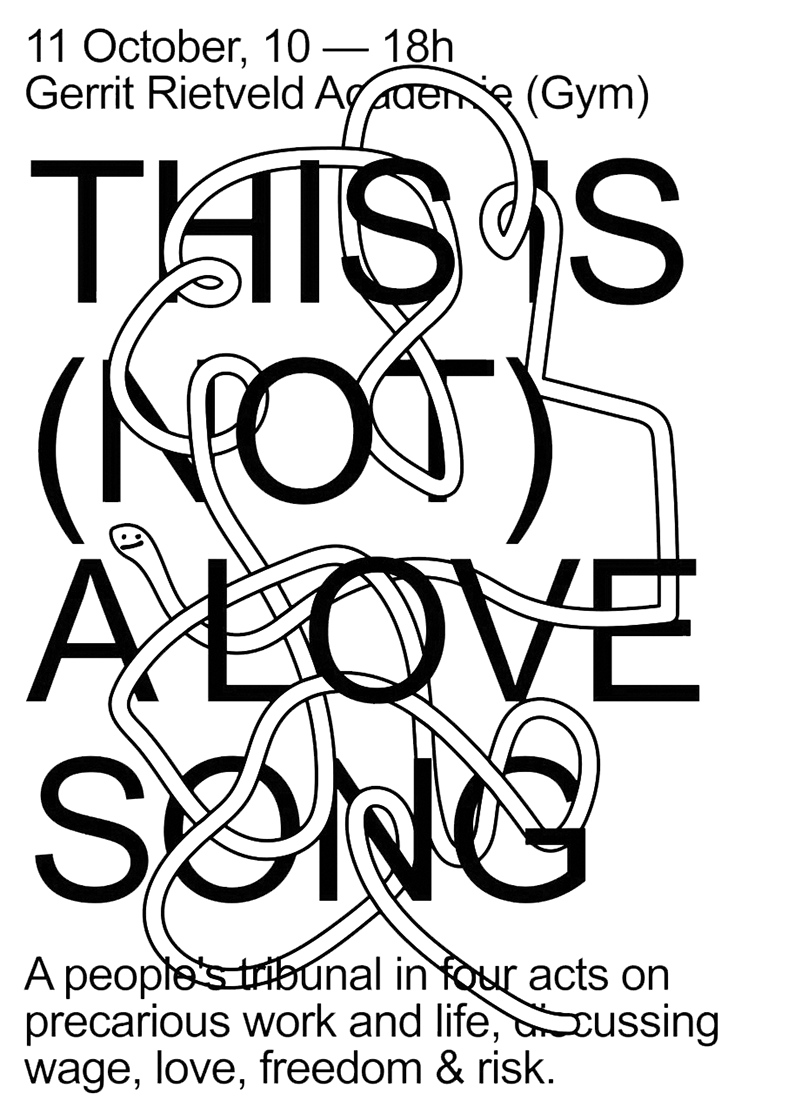 This Is Not A Love Song is a People's Tribunal addressing those issues, that took place on October 11th 2018 in Amsterdam. It addressed precarious work and life conditions within the arts and beyond in light of current neoliberal tendencies that inform today's highly flexible, insecure and meritocratic employment model, the logic of which is particularly present in the Netherlands.

As artists, designers, authors and other cultural workers we have to deal with a lot of flexibility in our everyday life. The work we do is based on our capacity as individuals and on an independent status, making professional relations often tied to an emotional context where the boundaries between life and profession are blurred. Work in the creative field requires to invest yourself personally - to love what you do, to seduce, to adapt, and to rely on yourself.

Precarious labor is the predominant working condition in the creative industries, often translating into unpaid work, short-term contracts or no-contract work or internships, insecure and unstable work and life conditions, individual competition, deprivation of rights and status, reinforced inequalities (class, ethnicity, gender, sexuality) - while promoting an insecure or flexible way of life as the privilege and freedom of making your own choices.

The event aimed to collectively diagnose how those working conditions promote the merits of individualistic behavior and competition over those of collectivity and solidarity - a model that is formulated as the blueprint for the future worker based on the artist’s capacity to rely on him or herself. 'The artist is easily understood as a paradigm for the ideal worker: passionate about what they do and willing to forgo material wealth for the love of it'.1 In this respect while precarious conditions are particularly poignant in the creative field the discussion will tie into a more general debate on the changing conditions of work and life in an increasingly flexible, deregulated and privatized landscape that forces many more professional occupations into the liberal perspective of a more open relationship that confuses wage and love, freedom and risk.

This Is Not A Love Song is not a love song. It will play out as a People’s Tribunal where the issue will be discussed drawing on courtroom protocols such as shared testimonials, expert witnesses, a collective deliberation and the formulation of a  verdict.  (...) 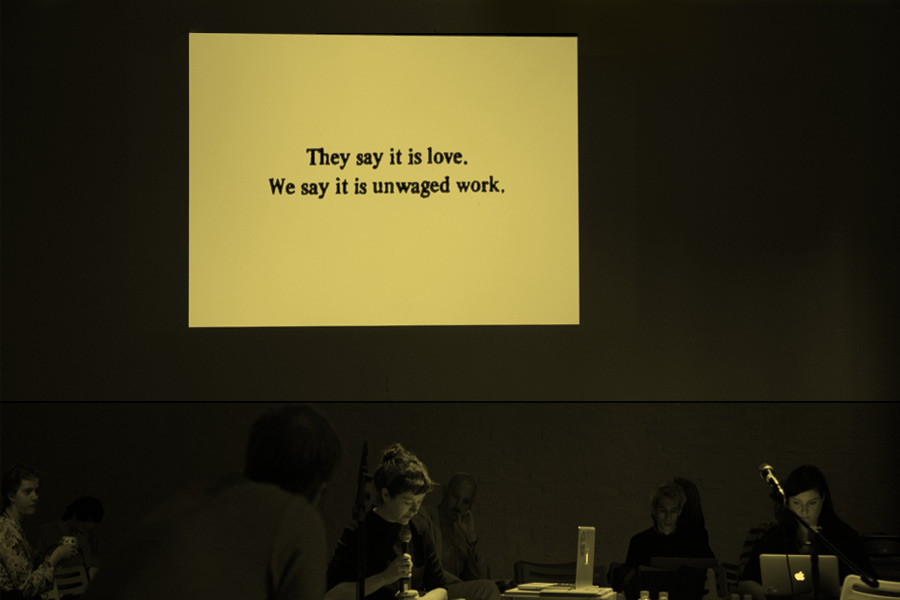 Tiphanie Blanc, Wages for wages against

A people’s tribunal is not a trial but a court of the people. It draws on courtroom protocols (giving/listening to testimony, calling expert witnesses, formulating a ruling) to publicly and collectively address injustices, and to take collective action. People’s tribunals have been used in circumstances where legal norms do exist, but their breach is not being prosecuted by the courts, for example, if the identified injustices are not illegal per se, but could and should be outlawed or if injustices cannot be grasped by the law because the existing law is unable to identify structural causes that lead to an unjust situation. Our understanding is that precarity is not a perpetrator, person, nor a crime. It is a condition brought on by a set of interrelations that connect the deeply personal and the systemic, the political and the economic.

From ‘Tools for Collective Action - Precarity: The People’s Tribunal’ By the PWB, published in DIS Magazine, 2011. 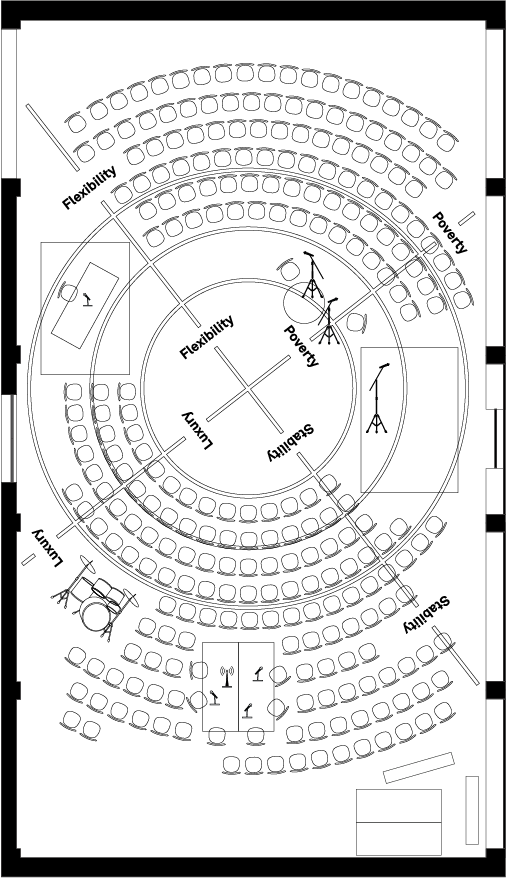 In the first act we will focus on the seductive aspects involved in our professions. The model for success starts with the quest and competition of going to the best schools, where the example is set, followed by being in a continuous competition through awards, grants and invitations - a string of professional flirtation seeking opportunities for which we are  flattered to be chosen and ‘lucky to be invited’. Much of this is based on appearances, availability and seduction, the logics of which form the basis for the cult of the individual. During Act 1 we will discuss those principles of competition, individualization and meritocratic values instrumental to self-entrepreneurship as a model for autonomy.

With the promise of recognition, we've accepted a conflicting situation.  Freelancing and working in open relationships with our different partners/employers without lasting commitment, unpaid  - which seems to guarantee a freedom of action and personal, artistic, and professional independence.  Paradoxically, it is on those same ideals that precariousness and neoliberal labour conditions are built up. The difficulties arise then from the gap between our ideals and the economic realities we have to face.

How does autonomy become the principle of  self-exploitation?

All cultural and creative industries share this paradox. In it, precarious work and insecure life are met with symbolic compensations through social valuation. The ‘exception’ even more so is central to contemporary capitalist politics.

If the confines of monogamous employment do not correspond to our ideals, does it necessarily imply an insecure way of life?

We must be able to rethink the models of engagement in other ways.

This 3rd act explores different ways to be engaged, exploring other models for supporting oneself. Within these other forms of engagement, what 'sustainability' is acquires a different meaning and function.

Focusing excessively on individual independence makes us forget about common values - that is; if autonomy is thought of as building oneself against or outside of a system.

In this section we will discuss the notion of ‘care’ as a form of organization based on overcoming the binary of individual versus collective. This means setting up alternative systems and forms of life that break our dependence on the material structures and the toxic mindsets of neoliberal capitalism. Perhaps this also means expanding the notion of art and politics and to rethink autonomy as a practice of everyday life

Joanna Figiel, with experience in The Precarious Workers Brigade and ArtLeaks

Tiphanie Blanc from Wages For Wages Against, Switzerland

John Jordan and Isabelle Fremeaux from The Laboratory of Insurrectionary Imagination who’s work merges the imagination of art and the radical engagement of activism.

Joram Kraaijeveld, Platform BK, Presenting the campaign for artist fee's 'Kunstenaarshonoraria' in the Netherlands, compared to other governmental instruments such as WWIK, BKR in a historical context.

Maria Muuk, presenting excerpts from her publication “I never rest, but I don’t know if I ever work either"

With the kind support of Het Sandberg Instituut, Amsterdam 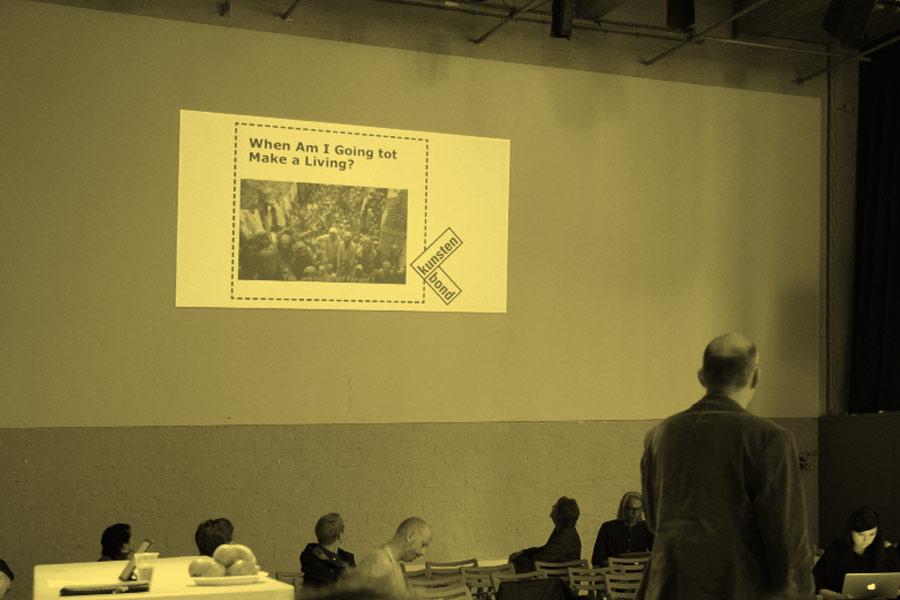 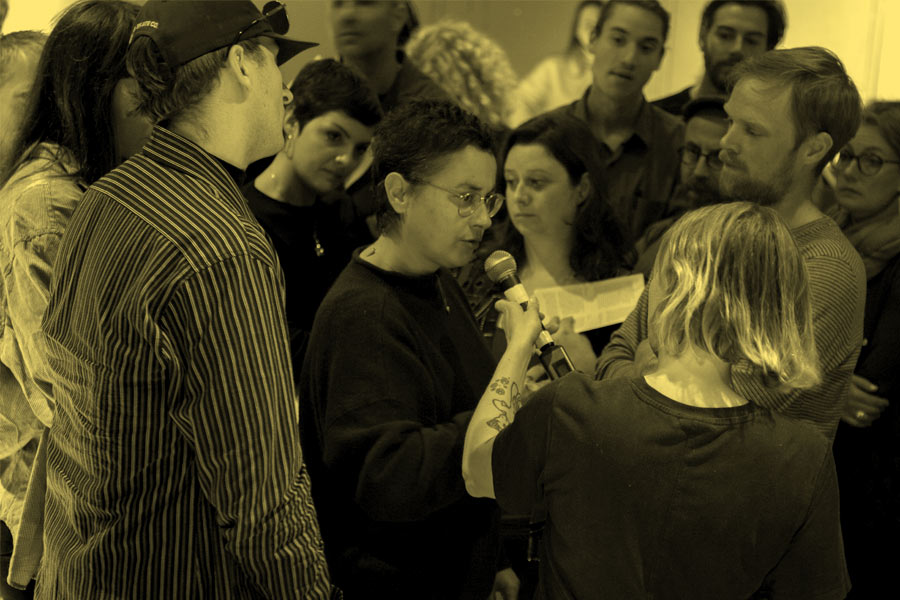 Tiphanie Blanc, Wages For Wages Against

Initiated in March 2017 by Ramaya Tegegne, Wages For Wages Against (WFWA) is a campaign that aims for the general payment of artist fees by non-profit art institutions within Switzerland. Inspired by the Working Artists and the Greater Economy (W.A.G.E.) initiative in the USA, the WFWA aims to raise awareness of precarious and exploitative working conditions we are faced with in our daily life as artists, curators, designers, students, authors, et al. through public and collective debates and question the ideological underpinnings of the current situation. Their campaign took place in a number of Swiss and international institutions, including the Kunsthalle Zurich; Forde Geneva; HEAD, Geneva ; Centre Culturel Suisse, Paris ; Tunnel Tunnel, Lausanne.

Tiphanie Blanc is an independent curator based in Brussel and founder member of ORAIBI + BECKBOOKS. She teaches Art Theory at the Geneva’s School for Art and Design since 2012 and organizes seminars for the Master's degree students in Visual Arts since October 2017. As a curator, she works actively in the field of publishing in different forms: exhibitions catalogs (Hotel Abisso, Panegyric, Tooled Sundays, Ultramodern), Criticism (Frog, Criticism, FluckIPaulus), artists' editions and self publications. She was in charge of the program at Forde contemporary art space in Geneva between 2010 and 2012. She organized several exhibitions including "Hotel Abisso" (CAC, Geneva, 2013), "Limits of an Object" (Forde, Geneva , 2011), "Fun Palace" (Center Pompidou, Paris, 2010), "IAO: exploration of psychedelia in France" (CAPC, Bordeaux, 2008).

Joanna Figiel is currently completing her PhD at the Department of Sociology, City University of London. Her research focuses on unpaid work, internships, precarity and policy in the creative and cultural field. She has collaborated with the Free/Slow University of Warsaw, the Citizens' Forum for Contemporary Arts, Precarious Workers Brigade; Minor Compositions; ArtLeaks; Fundacja Bec Zmiana, and ephemera.

ARTLEAKS is a collective platform initiated by an international group of artists, curators, art historians and intellectuals in response to the abuse of their professional integrity and the open infraction of their labor rights. In the art world, such abuses usually disappear, but some events bring them into sharp focus and therefore deserve public scrutiny.  Only by drawing attention to concrete abuses can we underscore the precarious condition of cultural workers and the necessity for sustained protest against the appropriation of politically engaged art, culture and theory by institutions embedded in a tight mesh of capital and power.

The Precarious Workers Brigade is a UK-based group of precarious workers in culture and education. “We call out in solidarity with all those struggling to make a living in this climate of instability and enforced austerity. The PWB’s praxis springs from a shared commitment to developing research and actions that are practical, relevant and easily shared and applied. If putting an end to precarity is the social justice we seek, our political project involves developing tactics, strategies, formats, practices, dispositions, knowledges and tools for making this happen.”

Lara Garcia Diaz is an artist, activist and Phd researcher at the Antwerp Research Institute for the Arts (ARIA) and member of the Culture Commons Quest Office (CCQO). Her research examines the Commoning responses that have emerged due to current precarious living conditions and explores which mechanisms are used in such practices in order to transform the organization of social reproduction. She has published in journals such as Frame: Journal of Literary Studies(2017) or Art and Identity Politics (2018). Lara has also contributed in books such as What’s the Use (Valiz, 2016), It is the microorganisms that will have the last word (La Capella, 2018) or Exploring Commonism (Valiz, 2018).

John Jordan and Isabelle Frémeaux, The Laboratory of Insurrectionary Imagination

by the press and a "Domestic Extremist“ by the UK police. Co-founder of

Reclaim the Streets (1995-2000) and the Clandestine Insurgent Rebel

Clown Army he is also co-author of We Are Everywhere: The irresistable

Isabelle Fremeaux is a popular educator, action researcher and deserter

Together they coordinate The Laboratory of Insurrectionary Imaginationbringing artists and activists together to design tools and acts of disobedience,  infamous for launching a rebel raft regatta to shut down a coal fired power station, turning bikes into machines of disobedience, using ants to sabotage banks and refusing the attempts at censorship by the BP sponsored Tate gallery. Co-authors of the film and book Les

live and work on the zad of Notre-Dame-des-Landes, a liberated territory

against an airport and its world.

PUB is an interdisciplinary initiative by students from different departments of the Sandberg Instituut. It aims to structure, develop and establish a publishing culture within the school. While investigating the possibilities in the context of an artistic masters program, PUB is a hub to identify interdisciplinary connections and accelerate collaborations amongst students and third parties.

San Serriffe is an art, theory and design bookshop in center of Amsterdam, run by Pieter Verbeke and Elisabeth Klement.

As the postgraduate programme of the Gerrit Rietveld AScademie Amsterdam, the Sandberg Insituut offers Master Programmes in Fine Arts, Interior Architecture, Applied Arts and Design. The five Main Departments aim to deepen practices of artists, designers and critics. In addition, the Temjporary Programmes reflect on specific urgencies in society and the arts, and the Hosted Programs focus on collaborations with other institutions.

Stina Force on drums I

Wages For Wages Against, Switserland

This Is Not A love Song is an initiative of Elise van Mourik, Rosa te Velde and Tiphanie Blanc. Graphic design by Miquel Hervás Gómez